In the news today; “Thierry Henry has lodged controversial plans to demolish his £5.9 million north London house”. Originally designed by Richard MacCormac, he plans to replace it with a larger property – incorporating a £250,000, 40ft high fish tank! This project, if it gets through Planning, would seem worthy of channel 4’s Grand Designs programme presented by interior designer Kevin McCloud.

One of our recent projects, equally unique in design terms, also attracted keen interest from the Grand Designs programme to feature it in their series. We were granted Planning Permission for ‘Badgers View Farm’, a unique one-off residence for a private client in the stunning Chilterns.

The site, situated near Chinnor in Oxfordshire, enjoys fantastic views of the Chiltern Valleys. We were asked to design a new 4000 sqft house with a contemporary appearance and a distinctive ‘wow’ factor both inside and out. The Client has a geological background and asked us to take inspiration from the physical formation of the landscape in the area. With this in mind, the design of the house draws from the Cretaceous chalk which underlies the whole of the Chilterns itself as well as vast areas of Southern England, with its most famous outcrop at the White Cliffs of Dover. In many places the chalk strata are uplifted, folded and buckled and it is precisely this that motivates the design in which blocks of rock are juxtaposed and impinge one another. The house is composed of white rendered blocks which link together over a traditional ‘knapped flint wall’. Large areas of glazing overlook the spectacular views and establish a physical connection between the building interior and the wider landscape itself. 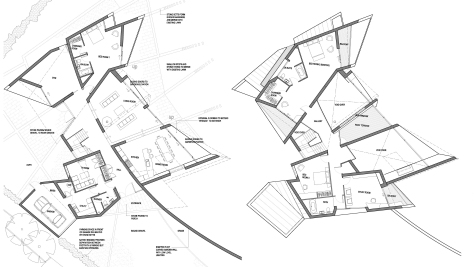 The Planning Permission document stated “The proposed development is considered to incorporate a high standard of design which will complement and respect the character and appearance of the surrounding area, with special regard to its location within the Chilterns Area of Outstanding Natural Beauty.”

So whilst Lewis and Hickey are perhaps more commonly known for our larger scale commercial development experience, we also have a strong port-folio of experience in delivering smaller unique and ultra-contemporary buildings.