“UK higher education institutions together educate some 2.5 million students annually, including over 400,000 from outside the UK, making the higher education sector one of the most important export earners for the UK economy. The last 10 years has seen significant expansion, with a 28 per cent increase in student numbers from all domiciles.”

The UK Higher Education system is world leading. We now have 165 HE institutes offering a wide-range of academic choice for both national and international students. The success of the sector has resulted in major investment and development in Academic campus teaching/ learning facilities and also student accommodation – a sub-sector which emerged in its own right, and matured significantly over the last ten years. The HE sector is arguably the strongest it has ever been. However, we are now witnessing a major change in the sector – the impact of this could be negative and have long term implications.

Lewis and Hickey have seen a significant amount of work over the last 6-8 years in Student Living. We have delivered over 11,000 beds to date. We have also worked with a growing number of Universities on Academic facilities. The image below is our “Si Yuan Centre of Contemporary Chinese Studies” faculty building at the University of Nottingham. This is due for completion at the end of October.

In the last two weeks I have spoken to a number of different Universities and closely related University businesses. It is confirmed that undergraduate student intake numbers are down this year. This could be by as much as 14% (54,000) or more. The full extent of the shortfall is not known just yet, but it is definitely causing some concern. It is anticipated that this reduction could cost the HE sector £1.3b in the next three years.

This year sees the start of the £9000/ year fees and, despite warnings from UCAS, the Governments policy on AAB requirements (from ABB). Add to this the continuing global recession. The outcome is a shortfall in students starting University. The reasons for this are no doubt varied. Affordability is a major one, but the Russell Group Universities are also seeing their top courses under-subscribed for the first time due to the AAB introduction. Have we pushed the sector too far? Nick Clegg has recently made a somewhat unprecedented apology for the rise in fees from his parties perspective. This can be seen here (the non-musical version!). This apology (from the Lib Dem’s) underlines the significance of this issue.

There are wider implications as well. Privately owned Student Accommodation has continued to deliver strong yields for investors and lenders through the recession. However, demand and occupation is critical to financial models. Having as little as 5% empty rooms across a port-folio can have major implications. Owners/ operators are now assessing whether to reduce rentals and/ or invest in upgrading facilities – the former being most likely. This will directly affect asset values and of course investor returns, resulting in reduced confidence.

This could mean a rather bleak outlook. I believe that the HE sector and associated capital investment/ development could start to change/ reduce soon. The big question is; will this be a short-term blip (a year or two) or a long-term change for the sector? How the Government and HE sector respond to all this will be critical. No doubt the HE institutes will be unable to stand still, perhaps they will focus on further growth outside of the UK? This would obviously be negative for the UK economy.

The High street is part of Britain’s heritage and culture (as well as many other places). It was the social and economic hub of most Cities and towns. Today the High street looks rather sad and lacking in vibrancy; a mix of poor to medium quality retailers, charity/ discount stores and a growing number of empty units.

Why is this? Simple; “The biggest displacement of the high street has been the boom out-of-town retail development” said Mary Portas at this weeks BCSC Retail Property conference I attended in Liverpool. As High streets became choked with vehicles and demand from large retailers was for larger, more flexible retail units, the High street started its decline. National brand retailers focused on easy access, big FREE car parks and flexible retail spaces. The Planners response to the rapidly expanding Supermarket brands was “Yes, build out of town!“. Huge mistake. Add the growth of internet commerce (which actually still isn’t as big as people perceive) and in 2012 our High streets are dying fast. The High street decline perhaps doesn’t affect retail per-say – retail exists elsewhere now, but it does have a bigger social and economic impact.

Hyper-consumerism, alongside endless credit/ bank lending and busy lifestyles fueled demand for large one-stop shops – American style. The only thing the Supermarket didn’t provide (initially at least!) was to make these retail environments ‘destinations’, with a sense of identify and place; a social hub – a beating heart to communities.

Mary Portas has nailed the key problems under her commission by the Government. I think the Portas Review succinctly identifies the issues and provides 28 recommendations to try and deal with this serious problem – which goes way beyond retail. One thing Mary said this week is that “New Edge of Town retail development should stop now…Supermarkets should go back INTO towns”.

It’s not just the Supermarkets to blame here. Local Authorities and Planners have a large part to play in this too. But perhaps most of all the Government should take responsibility.

Some recent examples of mixed-use, city-centre retail development has shown very different outcomes. Derby’s retail centre has been completely shifted by Westfield. St. Peters street (the former ‘high street’ of the City) has died. Westfield do operate a  successful destination; the centre has every major retailer, special events, food and drink outlets and a cinema…to name just some. However, it also has doors on every boundary of the fully enclosed building. It works well in isolation, but doesn’t integrate into the City fabric. By contrast Liverpool ONE by Grosvenor offers a very different feel. It doesn’t have doors into the centre, or a roof. It connects into the existing street fabric well and enhances the existing retail offer. Perhaps this is more sustainable for the City as whole. 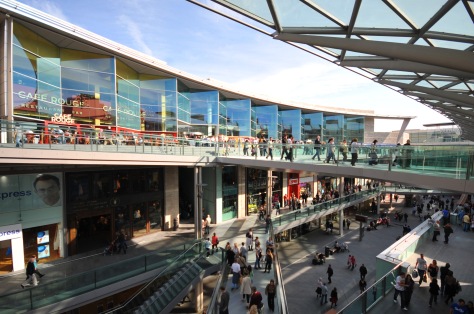 Back to the problem of our existing high streets and the towns/ cities which are struggling. What is the future of the High Street? The solution needs to attract people, re-create a destination with identity and a sense of place. It should include retail, but not exclusively. Real creativity is needed, new ideas. Portas talks about Children’s play centres, education and learning environments, cultural uses like galleries and museums as well as social eating and drinking venues. Many other things should be considered too. A stronger emphasis needs to be placed on the re-introduction of Independent retailers, not just the national brands. Also, what came from the conference, is that consumers seem to be demanded higher quality retail offerings.

In principle this all seems to make sense. However, notwithstanding the financial investment/ risks involved in new ideas, the mechanism for making this change is a massive challenge. Property prices are a problem, with no doubt some/ most in negative equity and/ or certainly worth a lot less than 5-10 years ago. People/ companies wont want to realise this ‘loss’ in value. Landlords are holding out for a return (?) or higher rents, at the cost of having units/ buildings sat empty. The tax and future cost implications of this will only rise.

The Government, having commissioned the Portas Review, need to act now and address the growing problem of the High Street. It will continue to have serious economic and social implications if we stand still.