As an Architect, I’m privileged to share a profession with some living notable individuals who have made a significant contribution to the built environment, on a global scale. The likes of Norman Foster, Richard Rogers, Renzo Piano and Terry Farrell spring to mind as major influencers. So too does one female Architect; Zaha Hadid.

Hadid died quite suddenly today after suffering a heart attack, she was 65. Hadid has attracted mixed opinions both in the industry and in the wider media over the years, but her raw talent and design ability speaks louder than anything else. She created a unique and identifiable architectural expression which was neofuturistic. Her buildings are a powerful, challenging and dramatic blend of curvaceous form, with elongated structures which really push the limits of what is structurally achievable.

Some of Hadids quotes include;

Hadid has been responsible for designing and realising many impressive buildings. Notable UK examples include; The Riverside Museum in Glasgow, The London Olympic Aquatic Centre and the Evelyn Grace Academy, London which won the coveted Stirling Prize in 2011. Perhaps her most impressive and celebrated building in the world is the Heydar Aliyev Centre in Baku, Azerbaijan, completed in 2012. The list of buildings could go on and on. However, the best way to really appreciate her work is through images and I’ve created a collection on Pinterest, click here to see them.

There is no doubt that her early exit in life will have a major impact on the world of architecture. Her legacy is vast in terms of built form, but there’s another aspect to her legacy which will no doubt play out in the coming weeks/ months.

As importantly as her buildings it could be argued, Hadid was an important woman in architecture; oddly somewhat of a rarity even today. The western architecture and construction world are, rightly, working hard to promote a better balance of women in what remains a very male dominated industry. Equality is hugely important in today’s society and Hadid’s success is a testament to the fact that women with incredible talent can, and absolutely should, achieve truly great things and be recognised for those things too. 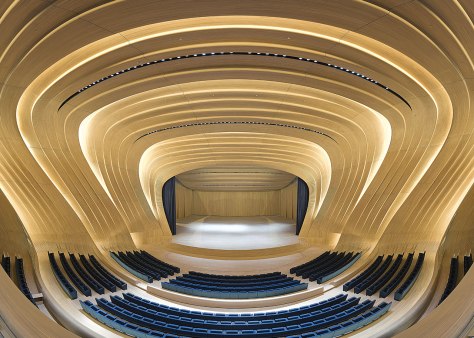