London has some amazing parks. This morning I took a run along the Regents canal, into Regents park and up to the top of Primrose Hill. The view from there over the city is quite something.

Yesterday I was over in Stratford, East London and took a brief walk into the newly opened Queen Elizabeth Olympic Park. This is an impressive place. The Aquatics centre stands out; it looks stunning with its free-flowing form – and the removal of the temporary ‘door stop’ shaped seating stands used for the Olympics. The stadium is being reconfigured at present to form it’s long-term 60,000 seater set up for West Ham.

Standing next to the stadium is the ArcelorMittal Orbit tower. An oddity of a structure in my view. I’ve never been a fan of this ‘thing’ which was my friend Boris Johnson’s mark on the games. It was conceived by Anish Kapoor as Art, but required the functionality of a building. Kapoor has created some outstanding Art creations, but even he struggled with this project in relation to the regulatory constraints imposed. However this structure proves to me that Art and Architecture cannot become one. The two can sit together and enhance each other, but putting them together into one simply doesn’t work, especially here! 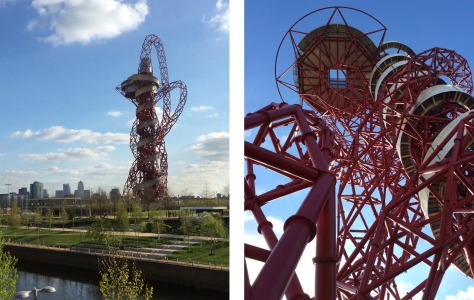 I was asked if I’d like to go up it for free – normally it costs £15, but someone had a spare ticket. I took the lift to the top and enjoyed the views of London, The Westfield shopping centre, the impressive new park below me – and an awful lot of nothingness around it. This place will evolve in time I’m sure, but for now there’s a way to go in creating a ‘place’ where people live and work; a community.

I quite like the new QEO Park. Having experienced the ‘Orbit’ I am still very much a critic on that. They’ve certainly spent some money on the new park! It’s right for London to grow/ evolve the story of it’s parks; it’s a defining and characterful part of London.