As British sport appears to be booming with success, this weeks attention turns to Cricket with the first Test of The Ashes at Trent Bridge. This is an important event for Nottingham to showcase the City to a global audience.

On Monday night this week I was a guest of Couch Perry Wilkes and Interserve Construction at a Black Tie Investec dinner at Trent Bridge. This was to launch The Ashes week. It was a great dinner in a stunning location. Our hosts/ entertainers for the evening were David “Bumble” Lloyd, Jonathan “Agers” Agnew and ex-Aussie player Glenn McGrath. These guys were on good form, Bumble was positively hilarious! I’m back there again today watching the second day of action as a guest of Freeth Cartwright in the Hound Road upper tier. 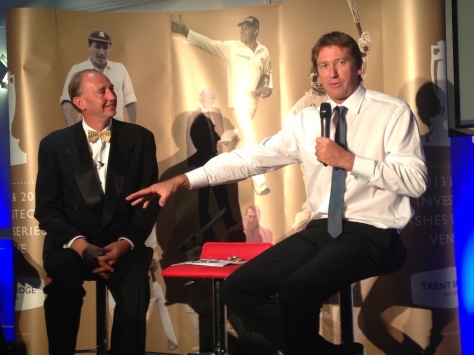 The Ashes series dates back to 1882 when England played Australia at the Oval – and lost. The British Sporting Times newspaper published a mock obituary stating that “English cricket had died, and that the body will be cremated and the ashes taken to Australia”. The following series between England and Australia was then dubbed “the quest to regain the ashes”. During this series a group of Melbourne women presented a Terracotta urn to England captain Ivo Bligh, the contents of which were reputed to be the ashes of a bail from the wickets. The series is now the one of the most popular and celebrated in the sport and the urn has become the ‘prize’. However, these are always replicas of some form. The original urn, which was gifted to the MCC by Bligh’s widow, lives at the Marylebone Cricket Club Museum at Lord’s. England are the current holders of The Ashes and look set to retain the title this year (hopefully!). However Australia have won it the most times (31), but a series win for England this year will put them level.

Trent Bridge pre-dates The Ashes as it was first used as a cricket ground in the 1830’s. The first test match hosted there was in 1899, between England and Australia. The ground was officially opened in 1841 by William Clarke, the captain of the All England Cricket Team and husband of the proprietress of the (world famous) Trent Bridge Inn. There is a stand at the ground in his name now. Trent Bridge has changed a lot over the years, especially recently with a number of new stands and floodlights. However the original Pavilion building, dating back to 1889, remains largely the same as it was and regarded as a trademark to the sport. Today the ground can seat 17,100 people and its most recent addition is Europe’s largest outdoor video screen which partly masks the County Councils office block built in the 1960’s and cost £1.8m.

Trent Bridge is a great historic feature of Nottingham and has evolved well over the years. It’s great to see The Ashes here again and its good for Nottingham’s economy.

Fingers crossed England will win this first Test and the whole Series in due course. Cricket certainly isn’t dead today.