Whilst in Dubai this week, I got to see the Burj Khalifa – its practically impossible not to see it! Opened in January 2010; this is the tallest building in the world. It stands at 829.84 m (2,723 ft). That is unbelievably tall! Much talked about this week; The Shard in London is 309.6m (1,016 ft). I have blogged about this recently – click here to see it. So to try and put this into some context; the Burj Khalifa is nearly three times taller than Europe’s now tallest building.

The tower’s architecture and engineering were performed by Skidmore, Owings and Merrill of Chicago, with Adrian Smith as chief architect. The project cost was just under One Billion pounds and it is owned by Emaar Properties. Although the project nearly failed in the economic downturn commencing in 2007. The Government sought a multibillion dollar bailout from ‘neighbours’ Abu Dhabi. The tower, initially known as Burj Dubai, was then renamed at its opening the Burj Khalifa, said to honour the UAE President Khalifa bin Zayed Al Nahyan for his crucial support in realising the completion of the scheme.

The project see’s the return of the title of ‘the worlds tallest building’ to the Middle East region after the Great Pyramid of Giza held the name for four millenia – it was suppassed by Lincoln Cathedral in England in 1311. The same building also took the title in the UK from St. Paul’s in London.

The building has many impressive statistics; here are just a selection;

This is a building of epic proportion. A global statement – as it was intended. It is to be another reason to pull people from around the globe to Dubai to sustain its future.

The building sits next to the Largest Shopping Centre in the world which I blogged about earlier this week – that blog has been a big ‘hitter’ so thank you for reading. It also looks down on the Dubai Fountain set in the Burj Khalifa lake.

Thanks to our business hosts in Dubai, we were able to visit the At.mosphere bar on the 122nd floor at twilight – apparently the best time to visit in respect of the climate at that time enabling that longest views. Also seeing Dubai fall from day to night is incredible. You really can see the whole World up there – well the uninhabited island resort they have built at least! According to one source, from the top you can see ten countries: United Arab Emirates, Kuwait, Saudi Arabia, Bahrain, Iran, Pakistan, Afghanistan, Yemen, Oman, and Qatar. Also, you can also see the curvature of the earth and a distance of around 500 miles – I’m not sure whether to believe this or not, but it could be true. 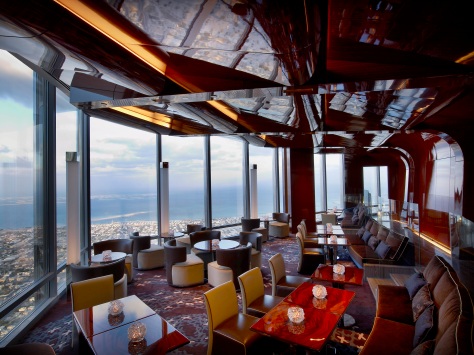 There are around 100 skyscrapers in Dubai today (buildings over 180m). These range from 40 storeys to 101 storeys – and everyone of them is dwarfed by the Burj Khalifa.

Whilst in Dubai I was keen to see the Burj Al Arab – one of few seven star hotels in the world. Its exclusive and therefore difficult to get into easily. But we took a short walk through the Jumeirah Beach hotel (this building takes no architectural credit from me!) and stood near to the Burj Al Arab. I have to say; its beauty is definitely in its form on a macro level. Its positioning on its own island is impressive. But close up, the building detailing is dare I say it; basic. Its panellised cladding and blue glass seems to dilute any feeling of quality. I’m told by our hosts in Dubai that the interiors are a little garish also. Having said that, I do still love this building, but I expected more and therefore felt a little disapointed. 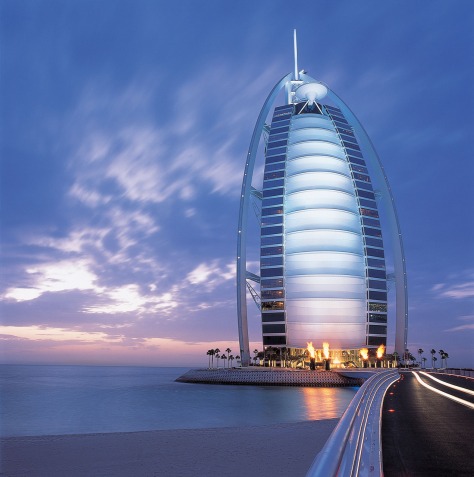 To stay at the Burj Al Arab you can expect to pay nearly £20,000 a night for the highest specification suites. A ‘standard’ room is over £600 a night. I think I’d rather stay in the Armani hotel in the Burj Khalifa.

One final observation I made in Dubai is how much post-modern architecture exists there. I didn’t expect this for some reason. The diversity of architectural quality is vast – its not all good! There is no doubt that American Architects have been busy here, but I do suspect James Stirling would have liked Dubai. I enjoyed Dubai – its scale and ambition is impressive.

4 thoughts on “The Tallest Building in the World. The Burj Khalifa”