It seems a while ago now since I was at University, working towards my life-long goal of becoming an Architect. Its a long old road which requires a huge amount of focus and dedication all the way. You’ve got to really want it. Studying Architecture part-time (whilst working full-time in practice) is perhaps the toughest route, in my view. This is how I qualified and we have a number of staff who are taking this route as well.

One young man who has recently been through the sleepless nights and endless weekends of work is Matthew Bennett in our Nottingham office. Matthew has been with us for over six years and I remember being asked by then our MD, Clive Welham, to meet him when he came for Interview. Clive said “Nick, you’ve got to come and meet this lad, he’s an even younger version of you!” Matt was nervous, but it was easy to see he had something about him and would fit in well. I’m pleased to say that Matt is now a key member of staff in our Nottingham team and well respected by his colleagues. He is developing into a good young Architect and has just completed his RIBA Part I, BA (Hons) degree at the University of Lincoln.

Matt’s final project is an interesting one from a number of perspectives and I wanted to share part of it – in recognition of his efforts on this and also his work at L&H.

Here’s Matt’s story about his project…

“The project; ‘Brick Reinvented’, began as a simple study of brick in general looking at the history of brickwork, physical properties, manufacturing, current uses and current possibilities in design and form. The study was demonstrated in a celebratory manor and whilst my personal view of brick was a positive one, it was apparent that there were some fundamental floors in the continuing use of ‘brick’ as we know it. One was from a use/ design perspective, bricks are so desirable mainly because durability/ flexibility/ cost. This had led to it being used in a fairly ‘functional’ way, particularly in the construction of domestic housing – with seemingly little/ no real imagination in terms of design.”

“The other, and arguably the most important was the question of ‘sustainability’. Through my research I discovered that most of the 2.3 trillion bricks produced in the world each year are manufactured in India and China in coal fired kilns and that firing a coal-fired kiln up to 2,000 degrees emits 0.5kg of carbon dioxide per brick. Additionally In this country co2 emissions from brick manufacturing are higher than ever and in response to this the European Union is looking at carbon taxing brick under the classification of heavy clay materials. This could mean that 90% of the co2 produced from the industry would be taxable, pushing costs through the roof and forcing a potential end of brick production in this country.”

“These two floors made me question its suitability as a material for the modern built environment and led me to seek for an alternative. There don’t appear to be any bio-bricks on the market yet, but in its research phases. This is an engineered module made predominantly of sand through a chemical saturation process called microbial-induced calcite precipitation.”

“I looked for a site where I could design a building that would promote the use of this ‘new brick’ as an improvement to the current and somewhat dated brick we all know. Nottingham seemed a good City, with its vast array of interesting historic brick buildings, I could design a modern interpretation of a masonry built mixed use building. The site was picked due to its prominence when entering the city centre from the south. Currently siting industrial sheds, I felt that the site was underutilized as a potential ‘gateway’ into Nottingham and that it could benefit from a medium rise high quality building.” 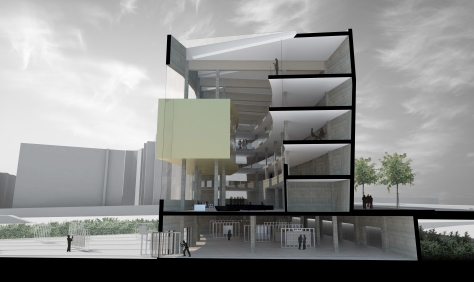 “The building’s use is for a Research & Education Centre, for Innovation in Construction Materials. The idea being that this would continue to promote advancements and use of new materials. The Centre consists of a public café and gallery with research laboratories, design studio’s, workshop and testing facility. The testing facility incorporates mounting panels that can be moved between the internal and external testing spaces allowing materials to be tested for various properties internally such as durability, impact, thermal and can then be moved outside for weather testing…”

Whilst this summary from Matt gives a mere flavour of his thinking/ design for this building, I think Matt has demonstrated an ability to think outside the box and be analytical in his design progression.

However, I think Matt’s strongest skill, both at University and in his work, is his ability to produce high-quality drawings which communicate his designs. Effective Communication – in lots of different ways – is after all perhaps the most important part of being an Architect. I certainly think it is.

One thought on “Communicating new ideas – from the next generation”